Due to the Covid-19 lockdown, normal services are cancelled, until at least 6th December.

When we are permitted, we intend to have a weekly service at St Wenna's at 11am. Assuming the same regulations apply after lockdown as were in place before lockdown, distancing regulations mean that spaces will be indicated for a maximum of 15 individuals or couples who can sit together. Singing will sadly not be allowed, but there will be music for reflection during the service, and Communion will be safely distributed. For the time being, neither refreshments after the service nor toilet facilities can be provided.
Safeguarding
Ensuring that children and young people as well as adults are kept safe whilst in our care is an integral part of our church life. If you have any concerns about safeguarding please contact:
- In the Parish: Valerie Olver, Parish Safeguarding Co-ordinator, 01503 262808
- In the Diocese: Sarah Acraman Diocesan Safeguarding Adviser, 01872 274351
Out of Hours for after 5pm and weekends:     - 01208 251300
In emergency situation:       - Local Authority Children’s Social Care: 0300 123 1116
- Local Authority Adult’s Social Care: 0300 1234131 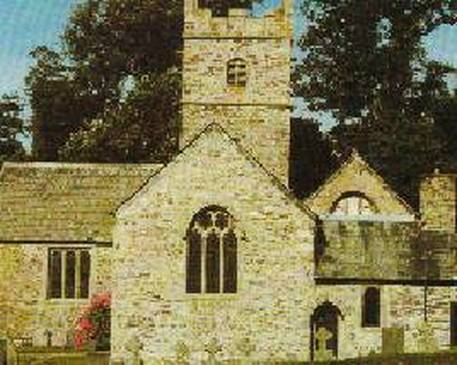 ​From 504 AD and possibly earlier, a church of mud and wattle has probably stood here to the glory of god. The church is named after Wenna, one of the children of Brychan, (ruler of Brycheiniog - Breconshire in Wales. In 6th Century, her brothers and sisters had travelled to Cornwall, some en route to Brittany, and it is perfectly plausible that St. Wenna herself (rather than later devotees of her cult) should have built the original 'cell' at Morval, near her well (now in the garden of Morval House). The name 'Mor-val' may mean 'marshy-valley'. After the  Norman  invasion in 1066, and the devastation caused, Morval church was presumably rebuilt in the present slate-stone and granite, in a traditional cruciform style. The earliest vicar's name to survive is  'Eustachius' in 1281
In 1244, Sir Humphrey de Locksore, presented the church to the priory of St Germans, which held the great tithe until 1539. The church was rededicated in 1318, and on 18th June, Bishop Walter Stapleton personally dedicated a new High Altar in the church. In 1441 Thomas Cokyn, Recorder of the City of London left 10 marks for building the fine three-stage "bell~tower" at the west end, faced with the local slate-stone, with four granite crosses above the tower. Also in the 15th century, the church was widened by adding the north aisle, with its arcade of Cornish granite capitals decorated with horizontal leaves, and its well-carved wooden roof-bosses, one showing a masons trowel and hammer,

On 21 July 1588, the Spanish Armada was first sighted as it passed within two miles of Looe. This was one Sunday when the able-bodied men of Morval were NOT in church, but were clutching their pikes up on nearby Bindown, wondering if boatloads of Spanish soldiers would arrive.

Below the floor of the south transept is a spacious vault, long since sealed, and hiding one of the church's best kept secrets - whether the limbs of John Glyn I, murdered and  dismembered near Higher Wringworthy in 1472, did in fact find their final rest under this floor. The whole church was restored in 1661 by the Buller family of Morval House, who added the south transept. In 1671 John Buller I paid for a sundial, perhaps the oldest church-sundial in Cornwall - with its inscription "UT HORA, SIC VITA" — "as (is) an hour, so (is) life'). A stained glass window near the  Altar embodies a well-meaning but unfortunate attempt in the Victorian era to portray St. Wenna as a bearded Englishman - i.e. the 7th/8th century St. Boniface/Winfred (or "Wenna-Frid' as he is here described) of Crediton. The glass in the west (tower) window includes a Fleur-de-lis motif which may recall the arms of Hugh de Morville, one of the four murderers of Thomas a Becket; tradition links him with Morval.